Stonehenge is a monumental circular setting of large standing stones surrounded by a circular earthwork, built in prehistoric times beginning about 3100 BC and located about 13 km (8 miles) north of Salisbury, Wiltshire, Eng. The modern interpretation of the monument is based chiefly on excavations carried out since 1919 and especially since 1950.

The Stonehenge that visitors see today is considerably ruined, many of its stones having been pilfered by medieval and early modern builders (there is no natural building stone within 21 km [13 miles] of Stonehenge); its general architecture has also been subjected to centuries of weathering and depredation. The monument consists of a number of structural elements, mostly circular in plan. On the outside is a circular ditch, with a bank immediately within it, all interrupted by an entrance gap on the northeast, leading to the Avenue. At the center of the circle is a stone setting consisting of a horseshoe of tall uprights of sarsen (Tertiary sandstone) encircled by a ring of tall sarsen uprights, all originally capped by horizontal sarsen lintels. Within the sarsen stone circle were also configurations of smaller and lighter bluestones (igneous rock of diabase, rhyolite, and volcanic ash), but most of these bluestones have disappeared. Additional stones include the so-called Altar Stone, the Slaughter Stone, two Station stones, and the Heel Stone, the last standing on the Avenue outside the entrance. Small circular ditches enclose two flat areas on the inner edge of the bank, known as the North and South barrows, with empty stone holes at their centers. 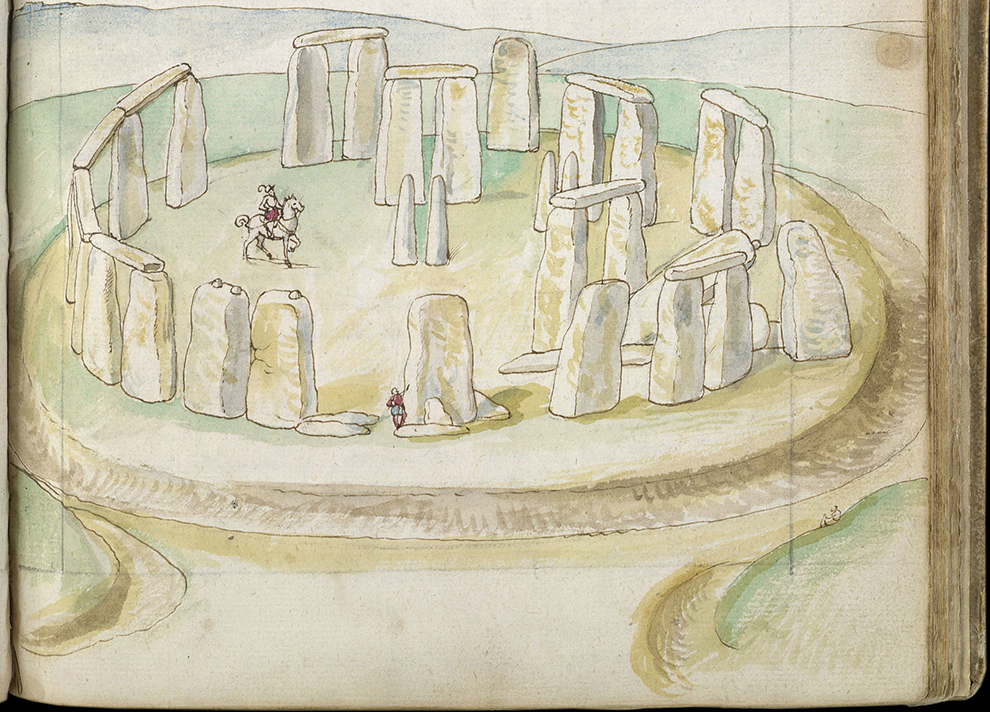 Archaeological excavations since 1950 suggest three main periods of building–Stonehenge I, II, and III, the last divided into phases. 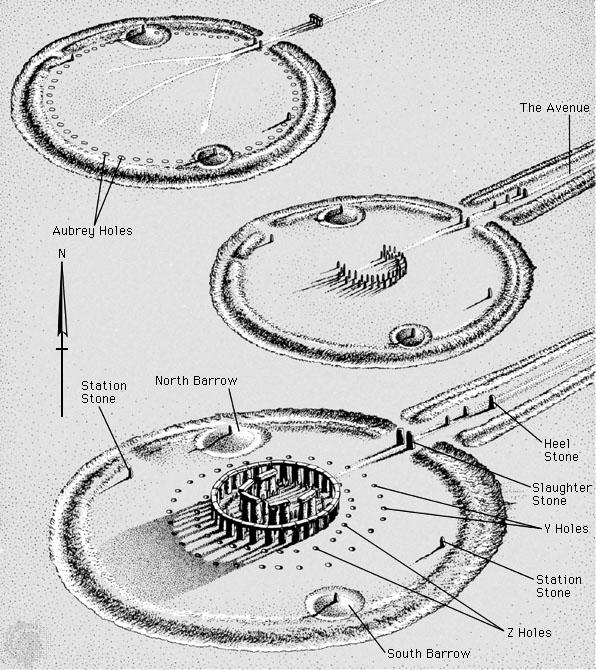 In Stonehenge I, about 3100 BC, the native Neolithic people, using deer antlers for picks, excavated a roughly circular ditch about 98 m (320 feet) in diameter; the ditch was about 6 m (20 feet) wide and 1.4 to 2 m (4.5 to 7 feet) deep, and the excavated chalky rubble was used to build the high bank within the circular ditch. They also erected two parallel entry stones on the northeast of the circle (one of which, the Slaughter Stone, still survives). Just inside the circular bank they also dug–and seemingly almost immediately refilled–a circle of 56 shallow holes, named the Aubrey Holes (after their discoverer, the 17th-century antiquarian John Aubrey). The Station stones also probably belong to this period, but the evidence is inconclusive. Stonehenge I was used for about 500 years and then reverted to scrubland.

During Stonehenge II, about 2100 BC, the complex was radically remodeled. About 80 bluestone pillars, weighing up to 4 tons each, were erected in the center of the site to form what was to be two concentric circles, though the circles were never completed. (The bluestones came from the Preseli Mountains in southwestern Wales and were either transported directly by sea, river, and overland–a distance of some 385 km [240 miles]–or were brought in two stages widely separated in time.) The entranceway of this earliest setting of bluestones was aligned approximately upon the sunrise at the summer solstice, the alignment being continued by a newly built and widened approach, called the Avenue, together with a pair of Heel stones. The double circle of bluestones was dismantled in the following period.

The initial phase of Stonehenge III, starting about 2000 BC, saw the erection of the linteled circle and horseshoe of large sarsen stones whose remains can still be seen today. The sarsen stones were transported from the Marlborough Downs 30 km (20 miles) north and were erected in a circle of 30 uprights capped by a continuous ring of stone lintels. Within this ring was erected a horseshoe formation of five trilithons, each of which consisted of a pair of large stone uprights supporting a stone lintel. The sarsen stones are of exceptional size, up to 9 m (30 feet) long and 50 tons in weight. Their visible surfaces were laboriously dressed smooth by pounding with stone hammers; the same technique was used to form the mortise-and-tenon joints by which the lintels are held on their uprights, and it was used to form the tongue-and-groove joints by which the lintels of the circle fit together. The lintels are not rectangular; they were curved to produce all together a circle. The pillars are tapered upward. The jointing of the stones is probably an imitation of contemporary woodworking.

In the second phase of Stonehenge III, which probably followed within a century, about 20 bluestones from Stonehenge II were dressed and erected in an approximate oval setting within the sarsen horseshoe. Sometime later, about 1550 BC, two concentric rings of holes (the Y and Z Holes, today not visible) were dug outside the sarsen circle; the apparent intention was to plant upright in these holes the 60 other leftover bluestones from Stonehenge II, but the plan was never carried out. The holes in both circles were left open to silt up over the succeeding centuries. The oval setting in the center was also removed.

The final phase of building in Stonehenge III probably followed almost immediately. Within the sarsen horseshoe the builders set a horseshoe of dressed bluestones set close together, alternately a pillar followed by an obelisk followed by a pillar and so on. The remaining unshaped 60-odd bluestones were set as a circle of pillars within the sarsen circle (but outside the sarsen horseshoe). The largest bluestone of all, traditionally misnamed the Altar Stone, probably stood as a tall pillar on the axial line.

About 1100 BC the Avenue was extended from Stonehenge eastward and then southeastward to the River Avon, a distance of about 2,780 m (9,120 feet). This suggests that Stonehenge was still in use at the time.

Why Stonehenge was built is unknown, though it probably was constructed as a place of worship of some kind. Notions that it was built as a temple for Druids or Romans are unsound, because neither was in the area until long after Stonehenge was last constructed. Early in the 20th century, the English astronomer Sir Norman Lockyer demonstrated that the northeast axis aligned with the sunrise at the summer solstice, leading other scholars to speculate that the builders were sun worshipers. In 1963 an American astronomer, Gerald Hawkins, purported that Stonehenge was a complicated computer for predicting lunar and solar eclipses. These speculations, however, have been severely criticized by most Stonehenge archaeologists. „Most of what has been written about Stonehenge is nonsense or speculation,“ said R.J.C. Atkinson, archaeologist from University College, Cardiff. „No one will ever have a clue what its significance was.“

Excerpt from the Encyclopedia Britannica without permission. Enter your email before downloading this document